via Photo Challenge: A Good Match

Ben Huberman on the Daily Post challenged his readers to come up with a “good match.” Mine is a bottle arrangement I made in my bedroom. I’m crazy for bottles, and I love colors, so this is a perfect decor statement for me. My OCD kicks in from time-to-time and makes me rearrange the locations of the bottles within the arrangement, but that makes me happy, too.

Here’s how they look: 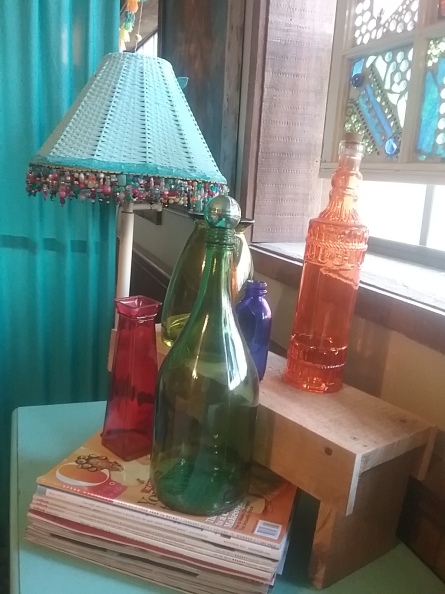 Can you tell my tastes fall somewhere between Gypsy, Bohemian, dumpster-diving?

Just hearing the word “banned” makes me feel a little sick. Whether it’s used as a word meaning to forbid or suppress, or it is used to mean excluding or expelling, it’s a word to which I have a visceral reaction.

One of my first forays into understanding this word was in high school when we were learning about books being burned by the Nazis. The books to burn were selected based on their subversive natures. This was a time in my life when books were very important to me. I wouldn’t even take notes or underline in my textbooks. Seeing pictures of “un-German” books being lit with matches and engulfed in flames was at the same time frightening and senseless to my young brain.

In my home state, hearing the word “banned” catapults me back to the 1950s and 1960s when Jim Crow laws enforced racial segregation. African Americans were banned from white restaurants, drinking fountains, and restrooms, among many other places.They were not allowed to  be a part of white workplaces, institutions, clubs, or the military.

I wish that I could wrap up today’s thoughts by saying something like,”I know that being banned is a terrible thing in whatever context it appears, but at least today, we do not have to face the hurt and humiliation of banned books or banned human beings,” but I can’t because it’s just not so.

In Kentucky, this year at a certain high school, students who had hairstyles such as dreadlocks, Afros of over two inches in length, cornrows, and mohawks were banned from their high school prom. And according to the American Library Association, in the past decade, there were 5,099 “challenges” against books that were deemed by some to have inappropriate content or were simply inappropriate overall.

Thankfully, the ALA “condemns” censorship, believing it is “still a very serious problem.” It is beyond their control, however, to monitor all schools and libraries in the nation which receive challenges and take the books off school and library shelves without the ALA knowing.

So it’s not time yet to pat ourselves on the back and enjoy a victory lap around the track. We, as a country, still have a long way to go.

“To deny people their human rights is to challenge their very humanity.” Nelson Mandela

And Then I Wrote…

Don't be ashamed of your story it will inspire others!

Tales of humour, whimsy and courgettes

Be Positive, Patient and Persistent...

It all started as the challenge of a year...

This is why I hate intellectuals

Written with its readers interests in mind.

MAKING A DIFFERENCE, ONE STEP AT A TIME

Ramblings of a Writer

Living the Path of Life